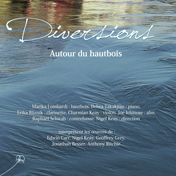 Oboe Concerto
Dedicated to Dominique Enon and completed in 2002, the Oboe Concerto was the composer’s last work but was never performed in his lifetime. It is a « classical » work in three movements, the first being lively and animated with two distinct themes, one very rhythmic and the other being lyrical. The second movement is a meditative Larghetto followed by the third movement, a rondo with three cadenzas. Edwin Carr’s last works are marked by a concern with economy of means to produce a music that is both approachable and expressive, resulting in a Concerto of innocent charm with echos of a modern pastoralism. The version for Oboe and Piano was realised in 2003 by Geoffrey Grey.

Elegy
This work is a song of mourning composed to the memory of Nicolas Enon in June 1999. Learning about the death of his oboist friend’s youngest brother, the composer spontaneously wrote this moving work.

Edwin Carr
He studied music in Otago and Auckland and was taught by Benjamin Frankel in London in 1948 and Geoffredo Petrassi in Rome. In 1955 he became Artistic Director of « Il Nuovo Belleto d’Italia ». He was a student of Carl Orff in Muinch. In 1960 he taught in Ipswich where he met Geoffrey Grey. In 1973 & 1974 he was Mozart Fellow at the University of Otago. Lecturer in Music from 1975 to 1984 he recorded his works and conducted the five Australian orchestras. He moved to Waiheke Island, NZ in 1991 and died in 2003. Carr’s autobiography « A Life Set to Music » was published in 2001 by Blanchard Press Ltd. Edwin Carr was awarded the NZ Order of Merit for his work in music in 1999 where he was acknowledged as New Zealand's most prolific composer in the classical tradition.

Diversions
Diversions for Quintet was written in 2003.  The idea of a work for winds & strings grew out of the influence of the composer's involvement in a group that had been playing the Prokofiev Quintet in G minor (Op.39) for Oboe, Clarinet, Violin, Viola & Double Bass. The title Diversions was initially chosen using the word in the sense of "distraction", or, in other words, to be intended that the idea behind the work is essentially abstract without any attempted profound philosophical attachments, or images, in the Stravinskian sense that music is about nothing more than itself - something that the composer had been pondering at the time. But of course there is another sense to the word "diversion" which is "diverting from a specified course",  and here the question can be asked; what is the specified course for a composer? And if there is none, can there ever be a diversion? Each chooses one's own language.....

Nigel Keay
Originally from New Zealand, Nigel Keay has lived in France since 1998. He has always been involved in the perfomance of his own works  either as a conductor or viola player. Nigel Keay’s earlier works were sometimes atonal however since the 1990s his music has included more tonal elements and is often inspired by literary and philosophical ideas.

Aubade for Oboe & Piano
This piece was written for his friend Dominique Enon. The work was published in 2005 and is a somewhat programmatic description of a modest French village early on a summer’s morning. Aubade was first performed in London in March of 2008.

Geoffrey Grey
After studying composition with William Alwyn & Benjamin Frankel in London, Geoffrey Grey finalised his studies in Paris with Nadia Boulanger. He was also for many years a professional violinist, violist, pianist & conductor. He and Edwin Carr first met at the Overseas Club in London, where such luminaries as Ralph Vaughan Williams, Arnold Bax and Roger Quilter were frequent visitors. It was Edwin Carr who helped him on his road to composing, introducing him to Ben Frankel and later encouraging him to go to New Zealand where, for a short time, he had a most enjoyable and stimulating period of work and pleasure meeting with many other composers, artists and authors. He has spent the main part of his working life in London but now lives in a quiet rural part of Dorset.

Three Pieces from Ecstasy Suite
Ecstasy Suite was composed over a period of eight days to celebrate the 800th birthday of Sufi master and world renowned mystical poet, Jalal al-Din Rumi. The music reflects Rumi's message that love crosses every cultural, religious and musical boundary to unite us all in the Beloved. Ecstasy Suite comprises nine pieces and was recorded for CD by Jonathan Besser and Bravura. In 2009 Besser arranged three of these pieces for oboe, clarinet, violin, viola and double bass for « Oboe 2010 ».

Jonathan Besser
Over the last thirty years award-winning composer Jonathan Besser has written a number of large-scale works including commissions for the New Zealand Symphony Orchestra, The Royal N.Z. Ballet, Auckland Philharmonia, the Wellington Symphonia, the New Zealand String Quartet and the Jade Quartet. Leader of his own new music groups, most notably the ‘Besser Ensemble’ (1987-1997) and ‘Bravura’ (1999-2010), he has composed for many leading New Zealand choreographers, theatre directors, poets and film makers and is performed extensively in New Zealand and in Australia. Originally from New York City where he studied at the Mannes College of Music, Jonathan arrived in New Zealand in 1974 and is now living in Auckland.

Oboe Sonata (1996, revised 2002)
The sonata is in one continuous movement, divided into three main sections. It begins with a fast and quirky section, featuring a syncopated oboe melody. The composer had certain cartoon characters in mind when he wrote this music; it is cheeky, changeable and light in spirit, but also has a sinister element. This evaporates into a slow, lyrical section, featuring a soulful oboe melody over slowly shifting harmonies. There is progressively more interaction between oboe and piano, and the coda includes a brief canon. The third section opens boldly, before a wistful theme in waltz time appears in the oboe part. The tempo accelerates and leads into a more assertive section that is edgy in tone. A cadenza-like passage towards the end sees the piano reiterating an ostinato pattern under the oboe line. The sonata ends with the oboe waltz theme.

Anthony Ritchie
Anthony Ritchie was born in 1960. He studied composition at Canterbury University and at the Liszt Academy in Hungary. He has written more than 150 works. His Flute Concerto is widely performed and has been recorded twice by Alexa Still. His Wind Quintet received excellent reviews in 2009. Several CDs including Remember Parihaka (an orchestral work) have been released by Atoll. Anthony Ritchie is a senior lecturer in composition at Otago University, NZ.

Marika Lombardi
The oboist Marika Lombardi studied at the Higher Conservatory in Milan where she obtained first prizes in oboe and chamber music. She then moved to Paris to study. A winner of several international competitions, she teaches oboe and gives masterclasses, and performs in Europe as a soloist and chamber musician. She is the Artistic Director of the International Music Academy in Lasino and of the festival « Risonanze Armoniche » in Trento, Italy. Marika Lombardi is Director of the Paris Oboe Festival.

Erika Bliznik
Originally from Boston, Erika Bliznik studied with Jonathan Cohler at the Longy School of Music and with Riccardo Morales, Clarinet Solo of the Philadelphia Orchestra, and former soloist of the Metropolitan Opera in New York. She is presently a doctoral candidate in New York. She studies in Paris with Philippe Cuper, clarinet soloist of the Opéra National de Paris.

Charmian Keay
Violinist Charmian Keay began learning the violin at an early age mainly from her mother, Miranda Adams, who is the Associate Concert-Master of the Auckland Philharmonia Orchestra. Other violin teachers include Justine Cormack, of the New Zealand Trio, and Kevin Lefohn. She was a violinist in the NZSO National Youth Orchestra in 2005, 2006 & 2008. Charmian Keay completed her Bachelor of Music with Honours (First Class) in Performance Violin in 2008 at the University of Otago, Dunedin, New Zealand. In 2009 Charmian Keay was a violinist in the Southbank Sinfonia, London. www.charmiankeay.net

Joe Ichinose
Joe Ichinose comes from a large family of string players and has played the viola, as well as the violin, from an early age. At 15 he won the 'Outstanding Performer' award at the North London Music Festival. He studied at the Royal Northern College of Music, graduating in 2006. Since then he has primarily been a chamber musician, playing with various chamber music ensembles performing throughout the UK, Europe and USA. Joe has also played regularly with the Southbank Sinfonia from 2007 – when he was a member – up until the present. Joe was a member of the Galitzin Quartet.

Raphaël Schwab
Raphaël Schwab studied at the Conservatory of the 10th District in Paris and at the CIM de Paris before being admitted to the Jazz Department of the Higher Conservatory in Paris in 2005. He has studied with Christophe Wallemme and Riccardo Del Fra. A versatile musician, he participates in several classical and contemporary music groups, and collaborates with a number of jazz musicians in Paris.

Members of the Quintette de l'Orchestre 2021 played together for the first time in Orchestre 2021's first concert in December 2006. The orchestra, founded by Elizabeth Askren and Nigel Keay, received on that occasion support from the France / New Zealand Friendship Fund, which permitted it to invite young New Zealand musicians to play in it and present the works of New Zealand composers. The orchestra has continued to specialise in contemporary repertoire, notably American and New Zealand.